Vladimir Tarasov employed sci-fi motifs in several of his 1980s animation shorts, including the anti-capitalist satire Shooting Range about violence, and dystopic futuristic Contract dedicated to power of money that corrupts people in the capitalist society.  Shooting Range is a beautifully rendered cartoon that features interesting perception of the US filled with avant-garde jazz (considered to be reprehensible music in the Soviet Union),classic American cars, highways with at least 12 lanes, and glass and steel skyscrapers. Stereotypical American hero wears jeans and baseball hat and is attached to his car in a way a nomad warrior attached to his horse. Violence and unemployment plague this geometrical generic Western city. The anti-hero inherits typical capitalist features including passion for cigars (while the unemployed  hero smokes – presumably more proletarian – Camel). 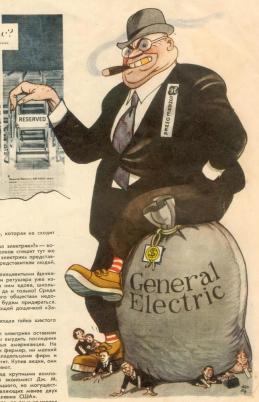 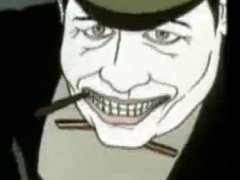 In a scene of temporal (underlined by transformation of a cuckoo clock bird into firebird) happiness Vladimir Tarasov pays a homage to Disney characters – a vital part of American cultural image.

While this craftily executed cartoon has some ideologically correct features, there is artistic fascination with  American aesthetics, design, music, and big city vibe. This cartoon presents  the West both disturbing and appealing.

Merry-go-Round (Veselaia Karusel) was a multivolume (33 episodes) collection of animation shorts. Pilot episode was produced in 1969.  Veselaia Karusel episodes often included highly innovative and non-traditional animation. Anatoly Petrov was one of the almanac’s authors. His Чудо (Miracle) is a two-minute piece from 1973 short based on a poem by Roman Sef, popular author and translator of children literature:

Have you seen a miracle yet
Never seen a miracle?
What a pity –
Have not seen a miracle
You should go and you should see
You would see a pure miracle
Wonderful miracle:
By a kitchen store near a building #3
Pushing up through the pavement
There is a little birch tree.

Theme of highly technological, just, and somewhat sterile future was highly popular in the Soviet culture of the 1960s-1970. Petrov transforms a simple poem about a tiny tree in the urban landscape into the clean shiny future that completely separates people from nature. The city of future with streams of isolated commuters is a realm of shining glass and chrome oversaturated with technology. In this world of concrete, glass, and iron a tiny tree is in fact a miracle.

Nothing creates a holiday spirit better than the Nutcracker. This version of E. T. A. Hoffmann’s story is combined with Pyotr Tchaikovsky’s famous ballets, the Nutcracker, Sleeping Beauty, and Swan Lake. It was produced in 1973 by Boris Stepantsev, one of the prominent Soviet animators who among other films created a famous Russian version of Karlsson-on-the-Roof based on stories of Swedish writer Astrid Lindgren.

The plot is slightly changed, and the protagonist of the film is not Marie from the original Hoffmann’s story, a seven-year girl from a middle-class family, but a young maid who helps the enchanted Nutcracker to break a spell and become a prince again.

There are no dialogues, and this animated ballet does not require knowledge of Russian language to enjoy.

Many Russians learned the Godfather‘s Speak Softly Love from this cartoon. Filmed by Vladimir Tarasov in 1978, Contact is about the meeting of two worlds. The alien spaceship lands in a peaceful countryside where the Artist (modeled after John Lennon circa 1967) enjoys a peaceful landscape. Such encounter with the Alien seems to scare the Artist, but music helps to overcome a language barrier.

An adaptation of the 19th-century tale about a boy who wanted to learn how the music box works. The rock opera style soundtrack is composed by Vladimir Martynov.