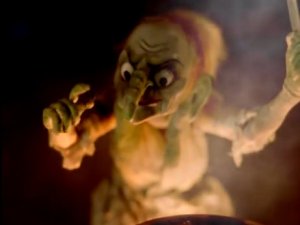 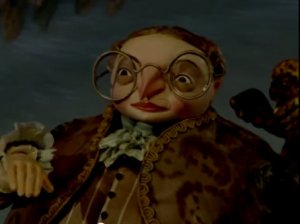 A Cloud in Love (Влюбленное облако) was made in 1959 by Roman Kachanov, one of the pioneers of the Soviet stop motion animation. During the Stalin era in Soviet animation, realistic style with extensive use of the rotoscoping technique was dominant. In the late 1950s and in the 1960s, during the Khrushchev’s Thaw Soviet animators revived stop motion technique. Kachanov produced several dozens of animation films both hand-drawn and stop-motion (puppet animation). Among his films are a well-known trilogy about Cheburashka, The Mitten, and sci-fi The Mystery of the Third Planet.

A Cloud in Love is a unique film based on a script by a Turkish poet Nâzım Hikmet Ran who lived in exile in Soviet Russia. It’s an allegorical story about an evil desert spirit who tries to destroy an oasis that is tendered by beautiful Aishe. Luckily, a Cloud falls in love with her and protects the oasis, although it costs him a life. It features a mixed technique (puppets, marionettes, and hand-drawn animation). In relatively low violent Soviet cartoon protagonists usually, survive and overcome challenges. However, in this cartoon, the main character (Cloud) perishes. It is not very surprising if one takes a look at the desert spirit. A mustached oriental villain that tries to destroy the oasis is not only a political satire on Turkish rulers by Nazim Hikmet Ran. The Soviet Union at this time was going through the condemnation of (some of) Stalin’s crimes. Children’s cinema and literature were less affected by the Thaw. Still, images of a ruthless and treacherous oriental ruler and his victims unavoidably create some allusions. Oriental overtones of Stalin despotism are empathized by historians (such as Robert Tucker) and his political enemies (such as Trotsky who called him Genghis Khan). Of course, this film is far from being a political cartoon. However, the presence of a menacing force that brings death and destruction reflects a mood of the day.